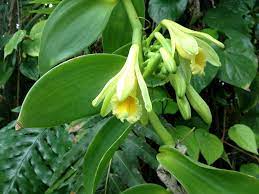 Why is it that the wonderful taste of vanilla has come to mean “plain” or “unexciting”?

Vanilla is a complex, aromatic flavor that is definitely not either of these.

The most likely culprit for vanilla’s bad press is, of course, ice cream. Vanilla ice cream is so good by itself that we naturally start with it as a base to add all of our other flavors to. Probably 90 – 99% of all ice creams have vanilla in them.

Few people stop to think that vanilla is added to cream to get that vanilla ice cream in the first place. Without vanilla you only have sweet cream. Try adding sugar to heavy cream sometime and you’ll quickly see what plain and unexciting truly are.

How Do We Get That Wonder Taste That is Vanilla?

The “Queen of Spices” is a relative newcomer to the world of spice — where the trade and routes go back to before recorded history. The vanilla plant is native to Central America, so was completely unknown to the old world before 1500. Today, though, much of the world’s best vanilla is grown on the islands of Reunion and Madagascar in the Indian Ocean.

The flavor comes from the long pod of a flower in the orchid family. However, the fresh pod is flavorless. The complex aromas and flavors come from a long, complicated and expensive curing process.

When cooking with vanilla, the pod is split and the millions of tiny seeds are scraped out. This is a trick to see if you are getting true vanilla — look for the tiny black dots. Another trick for the cook is to throw in the pod for more flavor. The pod itself is not edible — remember to take it out before serving — but much of the vanilla flavor is in it.

The best vanilla is called Bourbon vanilla. It comes from the island of Reunion which was formally called Ile de Bourbon. Another good variety is that from Tahiti.

It used to be prohibitively expensive to grow, harvest, cure and transport vanilla from the tropics to the tables, so great pains were taken to reproduce its taste with cheaper products. You can still find these in almost every store.

It is still very expensive and vanilla is one of the more valuable spices that we use — by weight. And that is the key. Because a little vanilla goes a long way. You would really have to be on a tight budget to make it worth the while to buy artificial vanilla today when the difference in the price of London whole beans is 35 times the price of a pound in cents.

Interesting note — although vanilla is best known in American and Europe as a taste in sweet dishes, pastries and desserts, it is often used in savory dishes in the form of Contorno (“dishes”).

Contorno, meaning “before the meal” is the preparatory dish before the main course. traditionally topped with garlic, truffles, olive oil, herbs and garlic, Contorno goes a long way from the usually-flavored salad.

The Latin word Contorno means ” Before the meal, prepare.” To give it a proper meaning, it will have to be said that the word “Contorno” comes from the Arabic word “al-qalam,” which means the “straw of palms.” This is said to be a reference to the preparation of the meal before the feast.

Today, there is also Contorno, which is the opposite of Contorno. This dish is what is known as roadside fare, and can be found a welcome disinfectant after quite a few spills, even used in home remodel,  and lots of drinking.

Contorno entrato (” Before the meal, preparing”) this is the first dish of the meal, and can be pasta, rice, soup or anything else you may have to prepare. Yes, it can be that easy.

Contorno verso (” After the meal, consuming”) this is usually the last dish of the meal before dessert. So, we have Contorno, Contorno verso and Contorno. The difference between them is that Contorno verso refers to the last course, while Contorno entrato may mean that the meal was eaten at another time.

This can get a little confusing, isn’t it? Because we are accustomed to the modern approach of a “celiac disease”, and even though the scientific approach is called “The Gift of Babcock” we still refer to it as such.

Most Americans do not know the medical history of Babcock Hall, the woman once dubbed the cure-all for everything including heart disease, allergies, colds, flu, cancer, mental illness, arthritis, constipation, arthritis, Alzheimer’s and much more.